18.11.2017 - The brewers of Hiperion organised a beer degustation during which the participants tasted and evaluated 8 different beers. Winner of the evening was the Chimay Bleu, scoring 3,76 (on a maximum score of 5 points), followed by the Gageleer Superior Dark (3,29) and the Spencer IPA (3,22). This time the brewers did not have one of their own beers evaluated. But maybe... we will see a lot more of their beers in 2018... !?

01.11.2017-  D'ou Belge, the brewing team of Hiperion, organizes a beer tasting on the 18th of November. You will taste up to 8 beers and you will learn to evaluate taste, smell and view by making use of a special beer tasting form. You can subscribe by mailing maes.eric@advalvas.be before November 15th. The participation fee is 15 euro.

42 people participated at the Kaas- en Bierproeverij, organized by our brewers. The cheese dishes were very much appreciated and especially the organic beers Zwarte Madam, Gageleer and our own beer d'ou belge 11 got really good marks. And while the younger participants enjoyed an early game of stratego the older generation played cards until midnight. Cheese, beer and games... it doesn't get better than this! [Photo gallery] 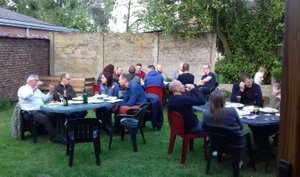 11.12.16  The brewers welcome some new puchases which allows them to go through the whole brewing process only using their own equipment. There is a new inox filter with a 55 liter capacity. And a cooler that is capable of cooling around 50 liters wort down to 20 degrees in about 20 minutes of time. That was, of course, a good motivation to get started on two new brew experiments, the results of which will be tasted in april. 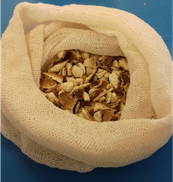 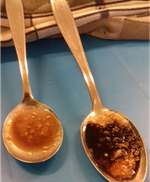 13.05.2016- At the 'bierproefavond' participants were served eight delicious beers to taste and evaluate on view, perfume and taste. The brewers decided to have two of their beers ("eight" and "nine") evaluated next to six top-beers, mainly from Belgium, but also including the newest trappist made in USA: Spencer. The Belgian Beers are the Rochefort 8, Duvel Tripel Hop, De Koninck, Wilderen Kriek and the fairly unknown Bière de Boucanier. Beers were ranked only by the votes of five participants who tasted them blindly. Soon is clear that beer "eight" has difficulties to keep in touch with this select group of beers. Of the five participants one ranked it third, two ranked it seventh, and two ranked it on the eight place. "Nine" did it remarkably well with one second place, one third place, one fourth place, one fifth place and one sixth place. Overall it got ranked fourth with an average score of 2,68 (on 5). Winner of the evening is Spencer, followed by the surprisingly strong Bière de Boucanier.

10.11.2015- Two new beers started the fermentation in the bottle. The brewers continued working on two recepies, and are trying to improve the fermentation process. In order to achieve that, the beers are being stored in an environment with slightly higher temperatures. The beers will be ready for a tasting at the beginning of next year.

07.09.2015- The latest brew of the bio-brewers shows that they are right on track again. Number seven really scores a bull's-eye, thanks to a new type of malt and some changes regarding the fermentation in the bottle. The chance of having a first beer ready for commercialisation is growing. And when this happens, it will be with a new name for the brewers. From now on they will be named “d'ou belge” (“the old belgians”), not only referring to the old belgian style beers they are making, but also to famous Belgian heroes of old...

14.02.2015 -   Hiperion decided to increase the investments in the brewing project in 2015. New material has be purchased so that the productive capacity is doubled. At the beginning of february the team experimented with new brewing timelines and two new beers have been barreled.

22.11.2014 The brewers welcome 23 participants at a delightful evening about trappist beers, with a fascinating speaker John Verbraeken. A succesful evening with a nice profit that will be invested again in the project.

18.10.2014 - The brewing project started already it's fourth brewing session and the team is trying for the first time to revise and improve the recipe. The process of brewing went on excellent and also the fermentation seems to have started perfectly.

01.09.2014  -  The ecological brewing project has got a new coordinator. Dieter Burssens is handing over the position to Eric Maes. As a brewer, Eric has been involved in the project since the beginning and he is willing to strive with his team for new and unequalled, but ecologically sound recipes.

09.07.2014 - Just before summer holidays a third beer has been put into bottles. The last six months the brewers showed to be very productive. They seem to master the brewing process every time more and more.

19.04.2014 - The second brew is in the barrel. We have had some problems with cooling and filtering, but the fermentation process started well. Three months from now the brewers will see the results of their hard work.

22.05.2014 - The second brew session ended. Almost 20 litres of beer have been bottled and start a new fermentation process inside the bottle

08.02.2014 - Finally. The brewers taste their first biological beer. The blond beer looks very nice, with little sparkling bubbles. It tastes sweet and is still very young. Tasty, but of course with room for improvement. Now and then a bottle is too frothy. That too needs to be taken care off. Anyhow, it is a promising start.

18.12.2013 - Our first brew, a little more than 25 litre, has been transferred into 34 bottles. Now only another fermentation inside the bottle remains. It means we'll have to wait untill half of februari to taste our first beer.

HIPERION invests its own beer with minimal environmental footprint. The project started in november 2012. At first we try to master the brewing process. And we look for  organically grown ingredients, and efficient brewing techniques.        [Foto galery]

11.11.2013 – The ecological brewing project made his first brew. The brewing team obtained the help and advice of master brewer Paul Van Diest. Although a difficult start of the fermentation, the team hopes to bottle mid-December. A first tasting of the beer will be at the end of February the earliest.